Since Dougal is taking his lantern, Dame Simonetta would like to light her lantern and lower it down so that she can see what's going on down there if/when Dougal and/or Kiplyn come back.
Maloof
Dame Simonetta

Dougal glances over to Kiplyn and whispers, "Do we check out the bundles of old web first or the opening in the side of the chasm? We're closer to what I assume is remains..."
Dougal Blackfoot (MV 9", AC 6, Lvl 4, HP 10/10) leather, short sword+main gauche

OOC: I'm about to re-draw the map based on these assumptions:

Willie and Beppo are heading to the 'secret doors' by the light of Willie's Lantern II. (Beppo isn't sure what that means, but it sounds fun, so he tags along.)

Kiplyn and Dougal are down in the chasm, lit by Dougal's lantern. Kiplyn is examining a cocoon, and Dougal just discovered an entrance to something. The extra illumination (now that I know he has the lantern) will give both of them a better look at what they're doing. (You'll see.)

It makes sense for Wilbur and Noh to go with Willie and Beppo's team. Unless I hear otherwise from the players (in which case, we can ret-con), I'm assuming that is the plan.

"There's no rule against splitting the party? Huh?" murmurs Noh to himself as he follows Willie, giving Carc a scritch.
All good here, one way to die as good as another, hopefully there's LOOT!

Last edited by rredmond on Mon Jan 24, 2022 8:48 pm, edited 1 time in total.
Faerie Fire specialized in: Entangle
Detection scrolls: Magic; Snares & Pits
Carc's squawks: 2=danger; 3=grave danger (is there any other kind); 4=RUN!
mushgnome: The real treasure was the friends we made along the way.

bilfur lights his torch so there is light

A Team:
Dougal spies a roughly 20' circular alcove in the western canyon wall. By the light of his lantern, he sees an unexpected sight: Furniture! (A kitchen table and chairs, to be exact.)
Kiplyn approaches the largest cocoon (roughly Hobbet-sized). It is dangling underneath the web like an apple hanging from the branch. Kiplyn could kneel on the web, reach down, and try to cut into the cocoon from above? Or he could try to pull it up, and get it in a less precarious position, before cutting it open?

B Team:
Dame Simonetta lowers her lantern into the crevasse. Bilfur lights a torch. They can indirectly see the glow of Dougal's lantern, off in the distance.

C Team:
Willie leads the way, squeezing between the puffballs heading west. At a blank section of wall, Willie speaks the phrase, "You DO NOT talk about ADVENTURE CLUB." This opens a secret door, revealing a short stretch of tunnel. Willie says, "ESPECIALLY not to the HUMANS!" This opens a second secret door. This reveals a longer section of hallway, with a sharp drop-off at the party's right hand.

At the end of this hallway is another blank section of wall, roughly door-shaped. What do you do? 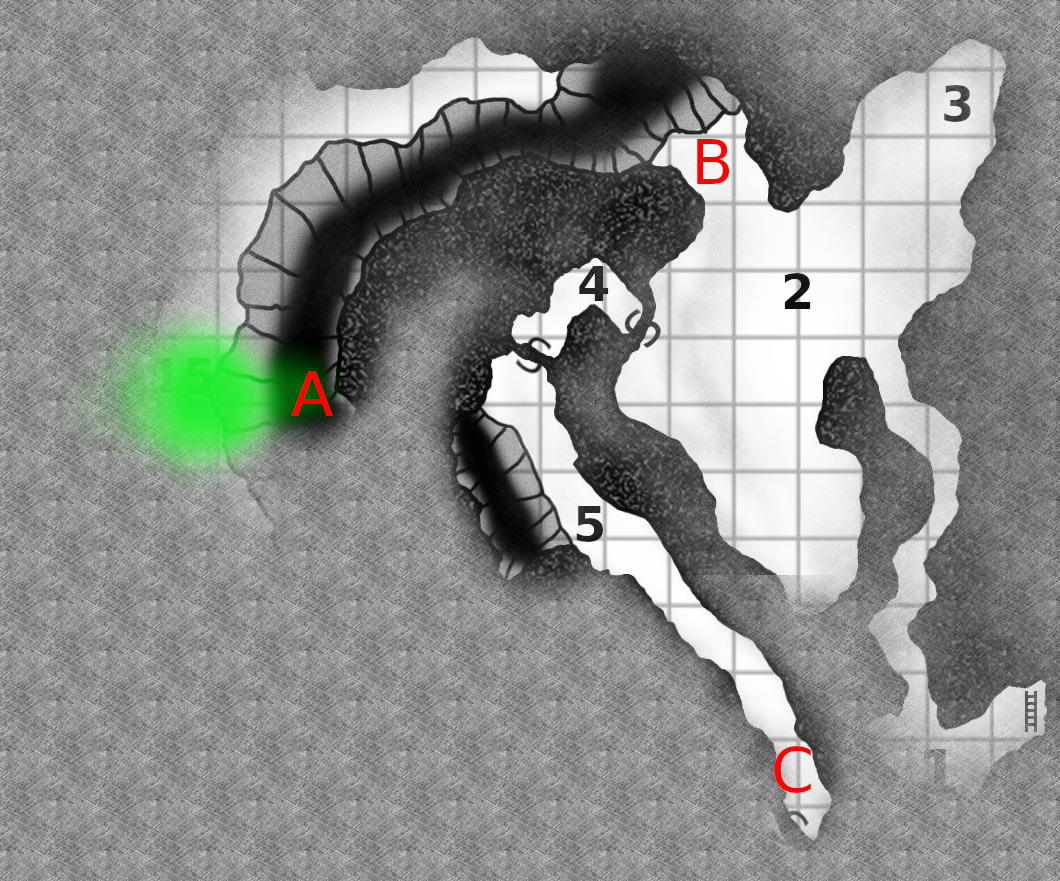 Willie turns to the other guys in his "team".

"Come on, speak the password! I did the last two. And we've got to hurry to make sure Dougal & Kiplyn don't get in trouble! Well -- not too much trouble, anyway."