With the deep chasm at their right hand, it takes our Heroes around 20 minutes to circle around clockwise, until they can see across the crevice to the puffball cave (area #2). From the left-behind frayed ropes and bent spikes that litter the area, it is apparent that past adventuring parties who couldn't find the secret door (at #4) attempted to climb over the void.

The returning Adventurers are expecting it, but the newcomers experience quite a shock: Approaching the westernmost point (#15) they detect a whiff of stale barbecue odor. On closer inspection, they see the aftermath of a terrible combat: The scattered remains of over a dozen Hobbets! Some of the bodies bear weapon-wounds, while others appear to have been mauled or chewed. All of the bodies are charred or burned, some of them to cinders. All of the bodies bear excessive wounds, beyond what it would take to kill an ordinary Hobbet, as though someone wanted them not just dead, but dead-dead. It's a shock to our newbies' sanity, for sure.

At the spot marked X there is an alcove in the wall. It is full of debris and trash that has been piled into mounds that would make perfect little sleeping-nests for Hobbet-sized feral creatures. The air has a foul and rotting stench, and thousands of fleas, roaches, bedbugs, and worse scurry away from the torchlight. Scattered amidst the trash our Heroes see the glitter of many coins.

Your DM has been a little loosey-goosey about communicating the passage of time, but our Heroes have been down here for 2 hours now. 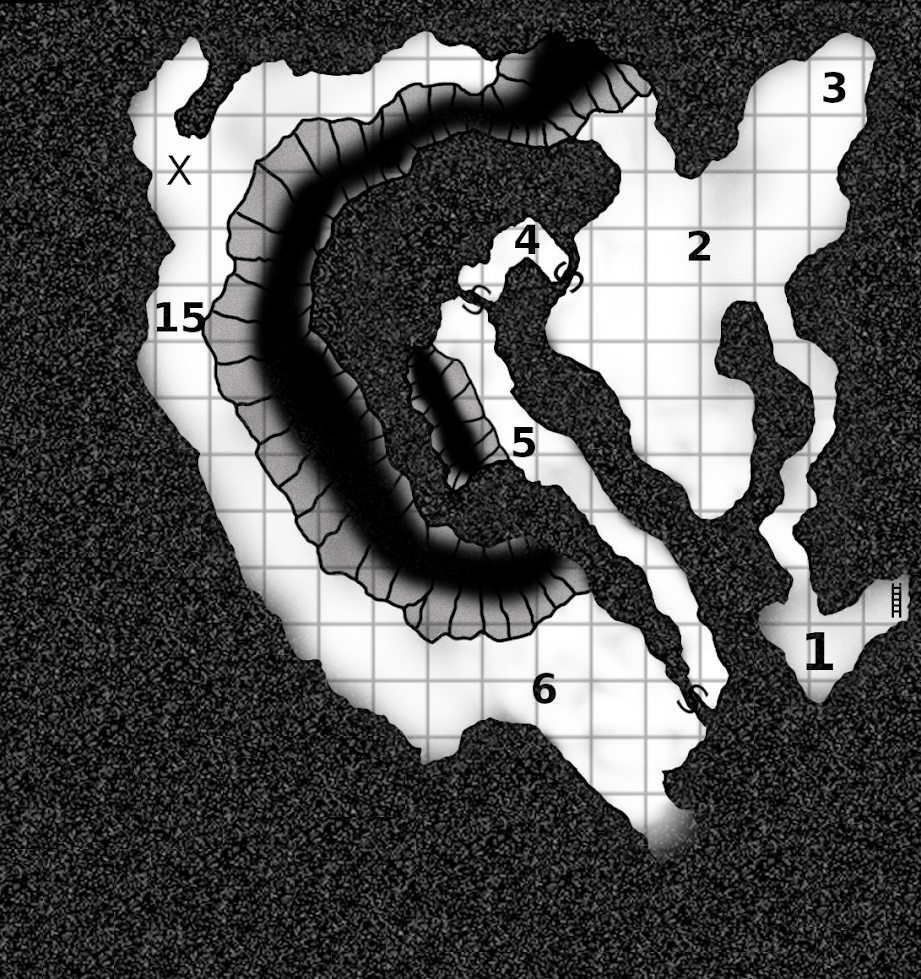 "Well that isn't delightful at all," Noh says, wrinkling his nose. Without getting closer, can Noh tell if there are any unnatural insects or creatures over there? Or even natural ones that might be living in those holes, and/or able to cause Hobbets harm??
Nobody ever catches Nuth.
Learned spell for today: Entangle

Noh doesn't detect anything unnatural, just a whole ecosystem of cave mites, lice, worms and so forth. In Noh's opinion as a druid, he thinks it's potentially dangerous to search this area without covering one's face and exposed skin. Any treasure recovered should be treated as potentially 'contaminated' and carried in a separate sack. Noh will say this: Whatever foul being slept here had a complete disregard for sanitation. No living or natural creature could have tolerated such squalor.

"Though this seems tempting," Noh says pinching his nose, "one would think it a trap. Almost as if the master of this dungeon is tempting us!"

"I think south might have been a less noxious way."
Nobody ever catches Nuth.
Learned spell for today: Entangle

"Were the Hobbets living here, or did they come here from somewhere else?" Dame Simonetta muses.

"Or both, perhaps it was is a battle between civilised and feral Hobbets?... But whoever won burned all the corpses... Probably to destroy any traces of disease, which would imply that the civilized Hobbets won. But if even their own dead were too infected to take away from here, I for one am not going any closer to that refuse pile. Like as not, the disease itself is what caused the Hobbets to become feral in the first place."
Maloof
Dame Simonetta

Willie hangs his head when he realizes where they are.

"This 'en't a spoiler. You've already seen what's here. There's a thing our friend Potty told us about -- it's a dis-ease called Ghoulism. It makes you go crazy and try to kill other people. It can even make you get up & fight after you're dead! These folks had it. And they killed our friend Chegs." There are tears plain on his face as he gestures to one of the bodies. "We burned 'em all in the hopes they wouldn't come back."

He peers into the alcove from a safe distance.

Willie's tale of the Ghouls sends shivers down the spines of the first-time Adventurers. To think, a few hours ago they were blithely munching on pancakes, while just below their feet, the ghoulism-afflicted shells of formerly-living Hobbets were crawling blind and mindless, hungering for flesh. It is a chilling thought!

As our Heroes inspect the ghoul lair from a safe distance, they see the undeniable sparkle of gold coins amidst the filth. Dozens of them, at least.

Your DM likes the idea to cleanse the area with flame. Noh thinks a roaring oil-assisted bonfire would kill the ticks and roaches for sure (and the coins would be undamaged). On the downside, you'd risk destroying any potential paper treasure, like scrolls. But Hobbets don't have much use for magic scrolls, now do they?

Dougal eyes the shine of gold and shakes his head, "We didn't come down here to leave gold behind. Better to burn it, chance burning a scroll, and count our coin safely than leave it and get nothing or just walk in and get..." he looks down and nudges a burned corpse with his foot, "... what this lot got."

Dougal gets out a flask of oil and some wadding and makes a Molotov cocktail. When it's ready, he lights it and tosses it into the cave area.
Dougal Blackfoot (MV 9", AC 6, HD 1, HP 5/5, FC 1 Man) leather, short sword+main gauche
Post a reply
153 posts