So the party bravely continues on, using the tried and true left passage method they eventually find all the caverns in this cave system. See map below

It becomes obvious that the goblins have fled, and by estimating the sleeping nooks, versus the number you killed, you feel there is perhaps a dozen left. With some special goblin perhaps. The area labeled 4 was a given over to a shaman or some sort. Phadian and Alrik recognize the signs of wicked idolatry. There was also evidence of herbs and bones and various other resources such that a shaman would use in his/her craft. In the rarest part of that cave is an alter which roughly looks like the small figurine you found before. Clearly some sort of Aerial spirit perhaps? What ever it is the goblins seems devoted to it.

Map Notes:
#3 was the lair of the Ogre you slew. #1 was the original cave you fought the first battle in and #2 is the central cave you killed the gnolls in. 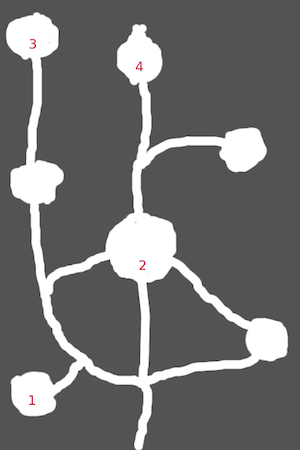 "Good that we drove the goblins away, I would not expect they left anything of value behind, but let us thoroughly check each chamber to see if they forgot anything. We can then consider our next step ..."

Phadian goes silent as he begins to search the current chamber and as the search continues.

Alrik helps Phadian search. "Will we be returning to the cave with the lake? Perhaps we should take a day to rest and build a raft, as Urist suggested."
Aldbane the Cleric (Level 5 MV 6" AC 2/3 HD 4 HP 18) plate +1, shield+2, helm, silvered war hammer, sling, staff of healing

"That sounds good to me. Its interesting all the malcontents living in this cave complex. I would like to find the shaman and the rest of the goblins, perhaps they will find us <ponders>."

Aside from maybe destroying the altar, Rhegaer is ready to move on, as well, if there is nothing further of interest in these caves.
Dougal Blackfoot (MV 9", AC 6, Lvl 4, HP 10/10) leather, short sword+main gauche

"Goblins are not 'forgive and forget' types, so I'm sure they'll be back," ponders Urist. "In the meantime, I like the raft-building idea!"

The group takes the time to wander the caverns and carefully check things over......

1) Urist is pretty sure that the furthest cavern (#4) once had and exit that caved in. The area beyond the altar show the tell tale signs of a cave in.

merias wrote:Alrik helps Phadian search. "Will we be returning to the cave with the lake? Perhaps we should take a day to rest and build a raft, as Urist suggested."

"This sounds good to me. I can assist with making the raft - made quite a few in my time."


ehiker133 wrote:Aside from maybe destroying the altar, Rhegaer is ready to move on, as well, if there is nothing further of interest in these caves.

"I'm thinking we might not want to mess with the altar until we know what it does... we could awaken some demon trapped inside of it or somethin'."
"Role, not roll. People who can't accept that in D&D prove that, irl, they can't accept actually THINKING their way to a reward - they want everything to be fast and perfect. That's why real men play OD&D :p" -Me

Return to “Edge of the Western Sea”