It is a miserable winter's day in the Miskatonic River Valley: cold, raw, and windy. There is still over a foot of snow from the New Years blizzard, constantly being rearranged by the wind into a shifting maze of snowbanks.

Incredibly, a lone Hobbet has braved the elements! Beppo Filbriggle has left the comfort of the Hobbet Lands and set out to seek his fortune. He is on a journey to the human village of Hornpipe where (rumor has it) there are opportunities for Adventure.

Anxious, shivering, and alone, Beppo worries he has wandered off the trail and will have to spend another night in the forest. Fortunately, just then, he spies something: A track through the snow! It's a couple of days old, and partially covered up by blowing snow, but there is an unmistakable trail in the snow, not of footsteps, but of some object being dragged through the snow. The track is about two feet wide, and the snow is smoothly packed down.

While a voice in Beppo's head warns him this might be the trail of some dangerous monster (a giant snake slithering on its belly, in a perfectly straight line?) it also might be a sign of civilization. Beppo weighs the risk and decides to follow the trail. Maybe it will lead him to town?

In some places, the trail has been completely covered by drifting snow. In other places, shielded from the wind, the trail is better preserved, and Beppo thinks he might also see some faint, individual footprints in the snow. He gets the mental image, of a number of people pushing, pulling or dragging a 2-foot wide object through the snow. Whether the footprints belong to hobbets, humans, or some other creature, Beppo cannot tell.

The gamble seems to pay off: The trail in the snow leads Beppo to (what he assumes is) The Village of Hornpipe! The first landmark he sees is an old windmill on the horizon. Then he begins to hear the sounds and smell the smells of civilization. He finds himself standing on the top of Hornpipe Hill, on the south edge of town. The village is spread out to his north, on the south bank of the Miskatonic. Directly on Beppo's right hand is the windmill, and on his left hand is the Hornpipe Hill House of Pancakes. Smoke rises cheerfully from the chimney, and the aroma of fresh pancakes is tantalizing to the hungry Beppo.

Now that he is within the town limits, the snow has been trampled by many feet, and it is impossible for Beppo to follow the mysterious trail trail in the snow any farther. Beppo doesn't see anyone in his immediate vicinity (on the hill), but off in the distance, he can see humans doing normal human things around the village (tending their animals and so forth).

Beppo Filbriggle, your adventure begins NOW! The red X means 'you are here.' You came out of the forest to the south.

(DM's note: I am deliberately leaving vague the exact time of day, so that whenever Beppo meets up with the other PCs, the timelines will sync.) 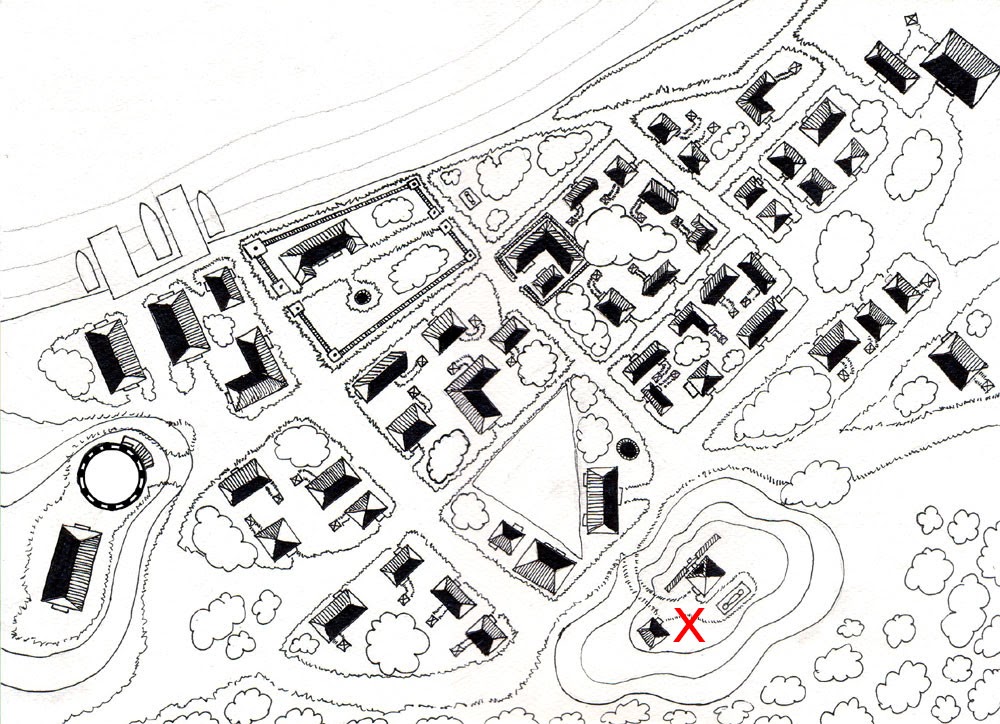 "O stop your grumbling..." Beppo says to his stomach. He decided to circle around the Hornpipe Hill House of Pancakes and climb up under the kitchen window. If he could spy any pancakes inside, maybe he could filch one. Or two. Or three...

Beppo circles the structure to get the "lay of the land." Here is what he sees:

The restaurant is a single-story structure. It has two entrances: A front door with an 'OPEN' sign, and a back door. (If Beppo tries the back door, he finds that it is locked.)

There are two windows: One opens onto the dining area, and the other to the kitchen. There are no windows on the back of the building, meaning that Beppo can't see into the back room(s).

Beppo approaches the kitchen window, in hopes that maybe he can filch something to eat. (DM dices for Beppo's luck.) Unfortunately, there aren't any pies conveniently cooling on the window sill, or anything like that. But the window is cracked open for ventilation. Peering through the open window, Beppo sees three people inside the restaurant, all of them Hobbets:

Behind the diner-style counter is a chubby middle-aged hobbet (A) wearing an apron. He is talking to a younger male hobbet (B) who is seated at the counter eating pancakes. This hobbet is dressed for the wilderness and has a raven perched on his shoulder. There is a third hobbet (C) seated by the fire, but Beppo can't get a good look at her from this angle. She is swaddled in blankets, and she seems like she might be resting or sleeping.

(DM makes a Move Silently check for Beppo, and a Listen check for the bird.)

The raven turns its head and calmly stares Beppo directly in the eye.

The hobbets don't seem to have noticed him.

What do you do? 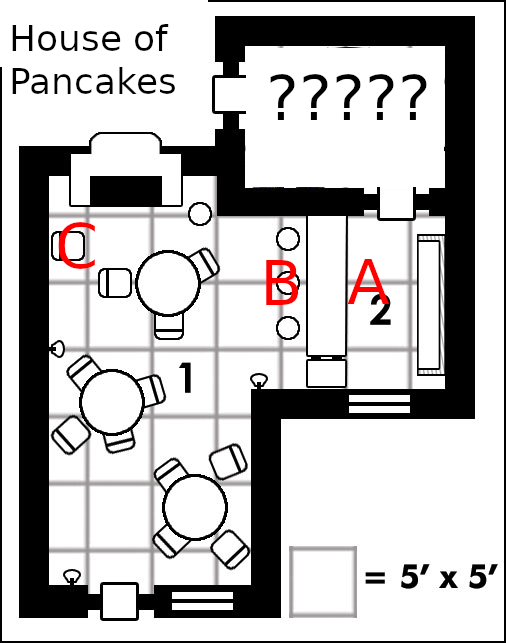 (Please note that this map is rotated; the front door actually faces NE toward the road and windmill, not south as the map implies.)

Beppo tries to pry the window open to get the hobbets' attention. As soon as one comes by he asks in a low voice. "Are the humans here keeping you as slaves? I can slip you out through the window while no one is looking..."

The hobbet in the apron meets Beppo at the window and laughs. "More like the other way round: The humans are slaves to my family-recipe buttermilk pancakes. My name is Frederick and this is my place. Come in and have something to eat! Seriously though: Those humans looooove to eat sugar. Especially their young ones."

How does Beppo react?

Understood better after eating these pancakes, says Hobbet"B", they call me Noh. I'm just waiting on the arrival of some old comrades. It's safe in here, come and join us. Noh then feeds Carc a little something before heading back into his stack of pancakes.
Faerie Fire specialized in: Entangle
Detection scrolls: Magic; Snares & Pits
Carc's squawks: 2=danger; 3=grave danger (is there any other kind); 4=RUN!
Kiplyn: ...no closer to pancakes and rest!

Beppo climbs in through the window as if that was a perfectly natural thing to do. He nods to Noh, then turns his attention to Frederick. "So this is a safe house? I'd love a helping of pancakes, having not had second breakfast yet. I do have coin to pay for it. I would also appreciate a seat by a fire to warm my bones. I don't know what I was thinking, leaving home in winter until waiting for spring!"

Warm your toes and your bones! Noh says with a smile. Winter is not a bad time for traveling, no planting can be done, and the creatures of the wood are sleepy, he adds with a scratch for Carc.
Faerie Fire specialized in: Entangle
Detection scrolls: Magic; Snares & Pits
Carc's squawks: 2=danger; 3=grave danger (is there any other kind); 4=RUN!
Kiplyn: ...no closer to pancakes and rest!

Frederick chuckles and says, "I guess you could call this a 'safe house.' I lease the building from a human landlord, and I make sure to pay the humans' taxes and follow their codes and regulations, to the letter." He taps a piece of paper on the kitchen wall with his knuckles. Beppo leans in and sees a framed Certificate of Occupancy naming Frederick Roundstone VIII as a Legitimate Businessman. Hanging above it on the wall is an antique hatchet with a plaque reading 'Chopper.'

"And that old gal resting by the fire is Ursa. She got caught in the blizzard on New Year's Eve and has a real bad case of frostbite. She's been drifting in and out of it. Here, have some raisin scones while I get the griddle fired up."