The party avoids the rubble-strewn section in the SW of the room. Looking through the cracks as they walk past, the Hobbets can see that the larger of the three does appear to open up into a wider area on the other side, but they decide not to explore it just yet.

Moving to the SE, the passage curves around to the W, and then leads to a new cavern (Area 23) just south of the Well Room.

The southern end of this room is choked with large spider webs! 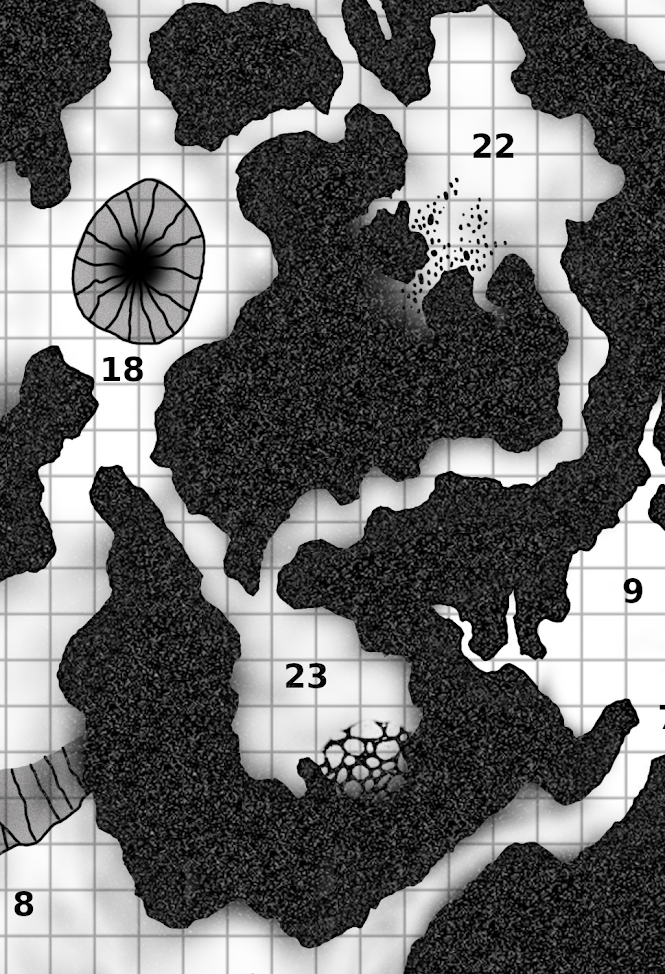 Noting the large spiderwebs, Dougal shines his light up towards the ceiling, checking for any of the creepy creatures that might be hanging around there.
Apologies for the absence lately, folks. I'll try to stay more active. But life is getting better.
Dougal Blackfoot (MV 9", AC 6, HD 1, HP 5/5, FC 1 Man) leather, short sword+main gauche

Dame Simonetta stops and eyes the webs with distaste. Does she see any hobbet-sized bundles wrapped up in the webs or on the ground beneath?

Dougal is relieved to see, there aren't any spiders on the ceiling!

Dame Simonetta guesstimates she can throw a torch 30'.

I'm of the opinion we should just leave the webs alone. I think we should go back and investigate the rubble area a bit more thoroughly, or move on to a new area, maybe north of area 19?
Maloof
Dame Simonetta

Our heroes leave the spiders alone and return to the rubble room (Area 22). (OOC: I forgot to answer Dame S's question: No, she did not see any prey-bundles trapped in the web, Hobbet or other-sized. Good question! Also I should mention, that the spiderwebs were thick and sturdy, not dusty and tattered.)

Hobbets are natural burrowers, and it doesn't take long to figure out a likely explanation for the rubble: a cave-in! Two of the three unexplored tunnels are narrow and appear to have been carved by a miner's pick. The third tunnel (the one in the middle) appears to have caved in, at some time in the past, revealing an open area on the other side. There are a couple of rotten support timbers half-buried in the stone rubble, supporting the miner/cave-in theory. Shining their lanterns through the breach, the Hobbets see the unmistakeable gleam of silver nuggets on the other side, mixed in with the scree! It would appear the miners of yore discovered a cache of silver, but perhaps they abandoned it due to the cave-in.

It should be possible to travel west or south, into either of the narrow tunnels, hugging the walls to avoid disturbing the rubble. To go southwest into the silver-strewn chamber, would require scrambling over the rubble left behind in the cave-in. (Difficult terrain; half movement rate.)

If it collapsed in the past it could collapse again. And why was it abandoned so quickly by whomever dug it out? (Unless they were buried beneath in the collapse). On the other hand, silver! I think it's worth investigating, we should probably use one of the non-collapsed narrow side tunnels. South or West, it's a coin toss unless anyone has a preference? (If no one has a preference, Dame Simonetta will toss a silver coin to determine which side-tunnel she will use)
Maloof
Dame Simonetta

OOC: I'd like to hear from some other players, but for what it's worth, Dame Simonetta's silver coin comes up... HEADS.
Post a reply
176 posts