Tet rubs his flubby ear a moment. Wha's that? he asks himself, absently as he strains to hear more clearly...
1d20=1!

I make no attempt to deceive (and rely on whatever Hinterlands "credibility" I may have accrued to assure you: I play by the dice).

Couldn't say it was my favourite d20, but I spent about five minutes rifling through boxes to find any dice at all (which is the sad state of affairs I find myself in). The first d20 I came across was one of my 80s/90s-vintage Gamescience, vanilla orange, un-inked dice. Personally, I find these a bit lacking in mass compared to some alternatives, but there is a bunch of content out there expounding upon their superior geometric qualities which, in its totality, is reasonably compelling but doesn't prevent me from buying unnecessary quantities of other dice

Willie listens intently for a moment & wracks his brain trying to figure out what that sound could be...
Strangely, my favourite (or most convenient?) dice were not installed, but this is easily fixed!

Fifty feet to the northeast our heroes discover a major six-way intersection in the dungeon architecture. At the center of the intersection, like the hub of a wheel, is a deep natural well that is the source of the wet, rhythmic sucking and blowing sounds. The cavern floor is carpeted with a greenish-black layer, like creosote or lichen, that is dry and crunchy underfoot. The entire area appears well worn and heavily trafficked. The ceiling is high out of sight and occasionally drips with water. Carc shies away from these water droplets and shakes his feathers if any of the moisture splashes on him. There is a faint smell to the air that none of you can quite put your finger on, kind of dank and salty.

Dougal deduces that the mystery sound is coming from something at the bottom of the well, which (by ear) he guesstimates to be 50-100' feet deep and out of lantern light. Something big and squishy!

Willie notices a ring of chalk-drawings around the circumference of the well. They are old-fashioned runes, like you would draw at your front door to keep the evil spirits at bay. He can also make out the recurring phrase: "THE PIT OF INSANITY!"

Tet listens to the damp susurrations from the pit and lets his mind wander. He has a chilling thought, a memory from childhood of an older cousin who was always up to no good. The cousin went away for the summer, to a fishing town called Innsmouth, and came back a meaner bully than before. There was a song the cousin used to sing, when he thought nobody was listening, a song not in English but made of glurping and blooping syllables that made young Tet deeply uncomfortable. The noise down the well reminds Tet of his cousin's song!

Dame Simonetta has an ear for languages and could understand this one if she chooses. However, she knows that this is a special type of language, a Mythos language, and understanding it is not compatible with a completely sane worldview. If Dame Simonetta chooses to learn the language of Innsmouth then she would still be Lawful and in full, rational control of her actions, but she would also become the first party member to join a special club. She would still be a member good standing of Adventure Club, but then she would also be a fledgling member of Mythos Club. Decisions, decisions...

Dougal and Willie may also choose to learn Innsmouth Mouth and join the Mythos Club, having passed their Int check and with unclaimed language slots. 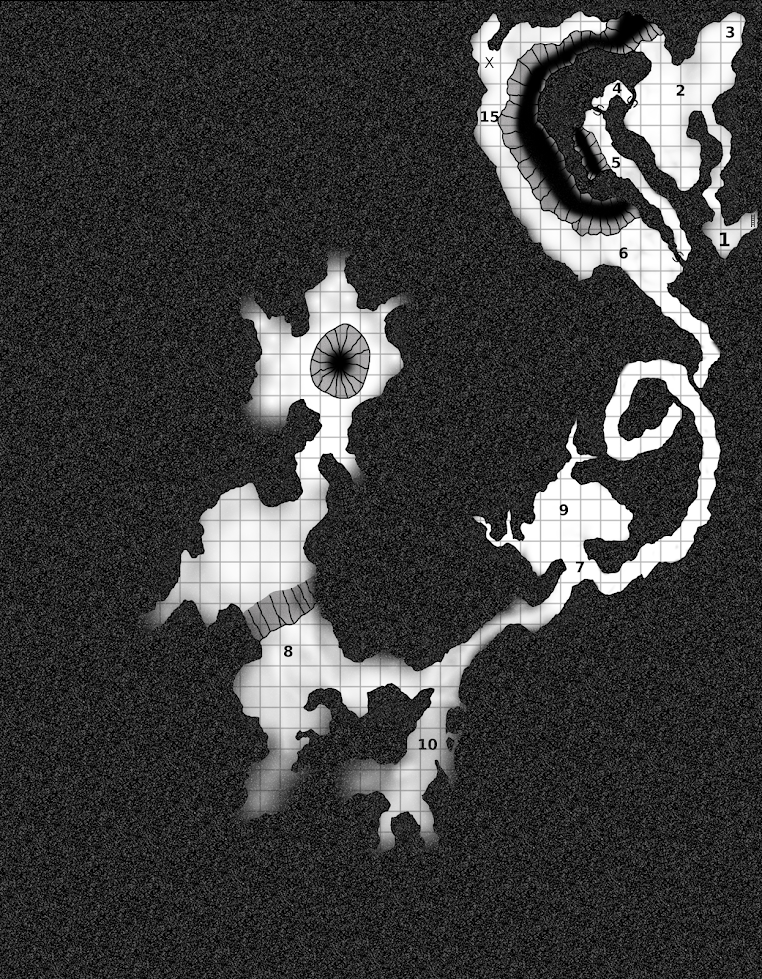 Dame Simonetta has 7 unused "language slots." Having passed her INT check, she may spend 1 slot to learn Innsmouth Mouth if she chooses. She would gain 1 point Cthulhu Mythos (MYTH), which is kind of like a cross between Insanity and Knowledge: Arcane Lore, increasing her MYTH stat from 0 to 1. She would basically experience the tiniest possible dose of our new Sanity mechanic, which is completely opt-in.

With Tet humming a little ditty, Dougal can hear the sounds more clearly now, for some reason. He closes his eyes in concentration to see if he can recall the translation...
Well YES Dougal is going to take Innsmouth Mouth and join the Mythos Club!

That wasn't really a question, was it?

The sounds Dame Simonetta hears seem to recall to her mind strange writings she encountered in her frivolous youth.
Dame Simonetta will choose Innsmouth Mouth as one of her languages.
Maloof
Dame Simonetta

Willie has sometimes wondered: all Hobbets are perfectly comfortable underground, but mainly in the well-furnished Hobbet-Holes in which they make their homes. Whereas Willie has always enjoyed climbing into caves & caverns that are less than perfectly comfortable -- even venturing, at times, into dry, sandy holes with nothing to sit on, or even into nasty, dirty, wet extents of caves filled with ends of worms and whatever else. He's always considered this prediliction must make him a little strange. But perhaps it was his innate strangeness, something inside him that drove him to explore such places, rather than the exploration that made him strange!

He steps gingerly around the runes & listens to the sounds coming from the Pit.
Another eager sign-on to Mythos Club...

Dougal, Willie, and Dame Simonetta each expend a language slot to learn the secret language of Innsmouth. Tet and Kiplyn don't despair! There will be plenty of future opportunities to join the Insanity Club, if you choose.

Dougal achieves a deeper understanding of the Words. They have the quality of a mantra like you would chant to keep from losing your mind in isolation. The help me isn't directed at anyone specifically and has an existential, prayer-like quality, and the water is like a baby crying out for its bottle. You know how Eskimos have 180 words for snow? The Innsmouth Mouth has a similarly rich vocabulary for types of water, and this is a particularly thirsty and pleading variation.

Dougal is so enraptured by the Deep that he loses track of himself for a moment and gets too close to the edge. He accidentally kicks a pebble over the ledge and it falls into the darkness below and lands with a muddy squelching sound. The mantra stops! For a moment there is nothing but raspy scuba-breath sounds from the pit below. Does Dougal detect an element of surprise? And then, a ragged and labored voice calls out from below:

Hello? Is someone there? Did you bring the water?

(To those who don't understand the Innsmouth Mouth, this sounds sort of like someone with a cracked windpipe slurping boba tea through a fat straw.)
Our sanity mechanic is tracked by a single stat called Mythos.

Kiplyn, Tet, and Noh have a Mythos score of 0. They have not yet "opted in" to our playtest sanity mechanic.

Dougal, Willie, and Dame Simonetta have opted in, increasing their Mythos to 1. This gives them a 1-in-6 chance to know Cthulhu Mythos related lore.

MYTH ranges from 0-6. Most real-world humans who are skeptical of the occult have MYTH 0. A typical resident of a fantasy world where magic is real would be MYTH 1. As MYTH increases from 2-5 the character becomes increasingly knowledgeable about the Cthulhu Mythos. MYTH 5 is the "best" possible score for a PC. A character who reaches MYTH 6 is removed from play and becomes an NPC pawn toward the goals and aims of the Mythos. This process is reversible: for example if a Hobbet is driven to MYTH 6 by an encounter with a shoggoth, his friends can help bring his MYTH back to 5 by defeating the shoggoth.

"First contact" with an alien mind from the Deep seems as good a time as any for a Sanity check. The mechanic is, roll 1d6 vs. MYTH. If the roll is higher than MYTH increases by 1.

Willie and Dame Simonetta each roll 1. That is equal to their current MYTH so there is no increase.

Dougal rolls 6 and so his MYTH increases to 2. His mind is deeply affected by communion with the Creature. He now has a 2-in-6 chance of knowing Mythos related lore.
Post a reply
212 posts