Noh readies his sling, and peers to where Carc is looking, after giving the raven a smile. "I have a flask of the good waters already Willie," Noh says, his eyes ever upward, "as well as a lantern. I have 6 flasks of oil, should I get more?"
How long does a lantern provide light for on one flask of oil? Also, and apologies if this was covered, can oil be used offensively?
Nobody ever catches Nuth.
Learned spell for today: Entangle

Willie, inspired by Noh's question, outfits himself with 4 extra flasks of oil, and 6 torches, depositing 9 gold coins in the strongbox.

"Well, I'm going with six, I think we'll be alright for a while."

Now he's unburdened of the holy water carton, Willie readies his sling, then whispers quietly to the others:

acodispo wrote:"Anybody have any ideas for getting a light up to the ceiling? If we can see it, we can hit it with rocks."

"If any of those mushrooms are sticky at all," Noh says wondering aloud, "we can douse it with oil, light it, and shoot it up to hopefully stick on the ceiling."
Nobody ever catches Nuth.
Learned spell for today: Entangle

waysoftheearth wrote:Tet huffs up to the chest a peers over his fellows' shoulders. Don't suppose there's anything to eat in there?
Unbelievably, the large hobbet is already feeling peckish.

Tetd doesn't find any food, because the only items here are 5gp or less.


acodispo wrote:While he's doing this, he'll take an inventory of the chest's contents.

Willie is confused; the chest appears to be larger on the inside than the outside. How is that possible? He feels like he could spend a whole hour inventorying the contents, and not reach the bottom.


rredmond wrote:How long does a lantern provide light for on one flask of oil? Also, and apologies if this was covered, can oil be used offensively?

Oil may be used as a thrown grenade-like weapon, but I do not allow the single-action "molotov cocktail" method. Rather, it takes two actions: One action to douse the target with oil; second action to ignite the oil with a torch or lantern. It takes one character two rounds, or two characters can cooperate to douse and ignite on the same round.

Tet's torch begins to sputter and will go out at the end of this turn.

Noh inspects the puffballs, but they aren't really sticky or adhesive; more dry and and leathery in texture.

Willie moves the holy water out of his inventory and purchases oil and torches.

Everybody has a look around the cave. In the northeast corner (near the number 3) the ceiling is almost low enough to touch, but in the rest of the cave, the ceiling is more than 30' high and therefore out of range for torch or lantern light. There is a bit of an echo in here, and cold drops of water falling from high above. Compared to the tight squeeze passage you wormed through to get here, this area has a yawning, cavernous ambience. There's even a bit of a breeze, from the ravine to the north. The proliferation of giant puffballs makes the space feel crowded and larger than it actually is.

There is no sign of the spider-goat. Carc continues to be agitated.

Who will carry the 2 vials of holy water? 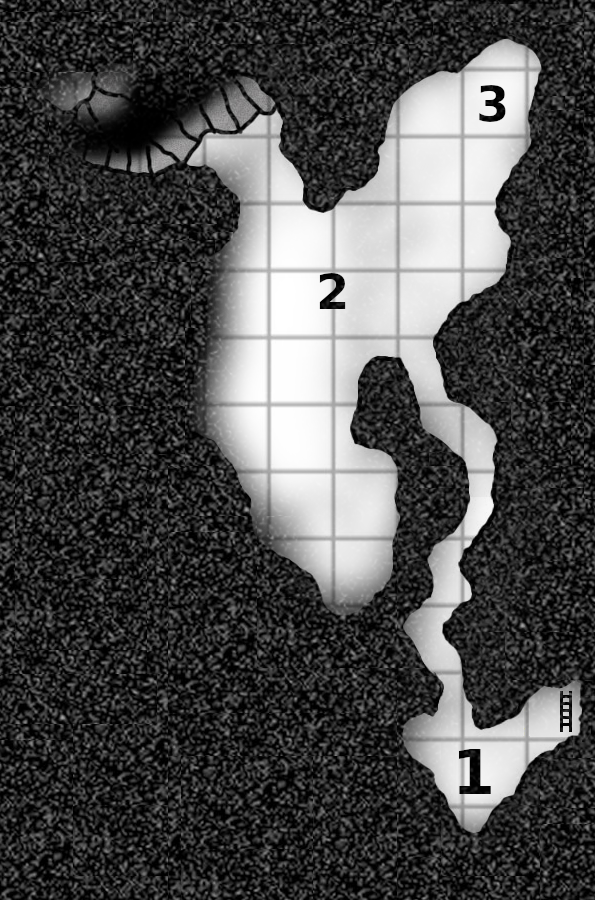 Willie will happily take one of the vials, as memories of the risen dead are still fresh in his mind. He reasons that if anything is unholy, it would be those abominations, and perhaps the holy water would have some effect against them.

He is intrigued by the nature of the possibly-magical chest, but decides they have more pressing matters to deal with.

Dougal shrugs, but can't think of a better idea, so he picks up a nice-sized stone from the ground and moves into position. Once everyone is ready, he throws his stone high and to the center.
Dougal Blackfoot (MV 9", AC 6, HD 1, HP 5/5, FC 1 Man) leather, short sword+main gauche

Dame Simonetta gets one nice round stone ready in her sling, and uses her other hand to throw another stone when all are prepared. She's ready to sling a stone at any movement revealed.
Maloof
Dame Simonetta

Noh thinks for a moment, then nods with a smile. He'll take the last holy water, if no one else does, carefully stowing it with his other vial. He can tell that he's, by far, not the best thrower of the group, but he's also not the best fighter. He'll find a good sized stone, one he's comfortable throwing, give Carc a smile and put his finger to his lips to hopefully indicate silence. "I'll throw mine to the right of the center of the ceiling," he'll whisper.
I think I know the answer to this, but just wanted to double check. Tossing a holy water vial at a baddie might entail a +/- from DEX, correct? Neither my DEX or my STR are any great shakes, but a DEX of 9 has no negatives added? Hey though, with my CHA Noh is more of a lover than a fighter

Nobody ever catches Nuth.
Learned spell for today: Entangle

rredmond wrote:I think I know the answer to this, but just wanted to double check. Tossing a holy water vial at a baddie might entail a +/- from DEX, correct? Neither my DEX or my STR are any great shakes, but a DEX of 9 has no negatives added? Hey though, with my CHA Noh is more of a lover than a fighter

DEX 9-12 is average; no bonus or penalty.
Willie, Kiplyn, and Dame Simonetta get +1 to hit with missile weapons from their DEX 13+
Additionally Willie gets +1 to initiative for his DEX 15+
Post a reply
153 posts