"Lock the door behind you, and make sure the 'Closed' sign is showing. We're celebrating!" Frederick adds exotic spices to the oatmeal porridge. Cinnamon, nutmegs, ginger, and cloves to warm Ursa from the inside. Each Hobbet gets his or her own stack of giant waffles, topped with fruit and whipped cream. For dessert Frederick reveals the pièce de résistance: a sweet potato pie with butterscotch mouse and maple syrup cotton candy sprinkles!

Frederick spoon-feeds his friend, and the porridge seems to restore her strength. At the end of the meal, she leans back in her chair, belches, and croaks two faint but recognizable words: "... bed ... pan ..."

"Oh my goodness! Quick, someone grab a pot from the kitchen."

Ursa answers nature's call right at the breakfast table. There is a sharp metallic 'plink' as something hard falls into the pan!

Frederick reaches in and scoops something out: a rough stone the size of a marble. He swirls it in his mimosa to rinse it off, then holds it up to the light and whistles in astonishment. "Bless my soul! A thunderboom ruby! You worked hard for this, old girl. Free Solo Club indeed. I am sorry I every doubted you." Frederick shows everyone the magnificent gemstone, a once-in-a-generation haul, and then tucks it in his vest pocket for safe keeping. Ursa beams from ear to ear!

Our Heroes were feeling high off the success of their Fourth Adventure, but they are now humbled to realize, their accomplishments have been eclipsed by an eccentric middle-aged Hobbet in her birthday suit!

Well-fed, mimosa'd up, and feeling upbeat about their next delve, Willie is nevertheless struck speechless, totally awed when he realizes what Ursa has accomplished.

"W-wow," is all he can think to say. He reaches out to shakes Ursa's hand, gently, while mentally filing away the wisdom she has given: that inside one's own body is a fine place to hide treasure in a pinch!

acodispo wrote: "W-wow," is all he can think to say. He reaches out to shakes Ursa's hand, gently...

Ursa's extremities are well-bandaged, so it's less of a handshake and more of a fist bump. She does weakly acknowledge the gesture so that bodes well for her prognosis: She seems aware and responsive to social cues.

The party's first hour in the dungeon is uneventful. It's been less than 24 hours since the last visit, and things are pretty much as our Heroes left them. No dangerous creatures are encountered in the Grand Chasm area, just the usual harmless spiders, cave salamanders, and beetles.

Upon reaching the Well Room, the Hobbets attempt to tiptoe around the edge without waking the Thing that lives down there. But the stone floor is covered with a thin layer of something dry and crunchy, and it's difficult to move with perfect stealth.

1d6=2, the party fails to sneak past the squishy mystery creature

The trapped Creature is powerless to stop Willie and the gang from continuing on their way.

"Hellooooo?!? A little help down here? Can you at least pee on me a little, on your way past?!? Curse you all! May Father Dagon choke your gills with pus, and Mother Hydra rot your fippers!"

OOC: I just did a big map update, which you can see here:

OOC: Sorry, it seems I missed the previous game post!

The NE tunnel leads to an empty cavern (Area 22). There are four additional exits from this room: a 10' wide tunnel leading SE and three smaller cracks leading SW. The southwestern section is rough terrain, choked with loose stone and gravel. 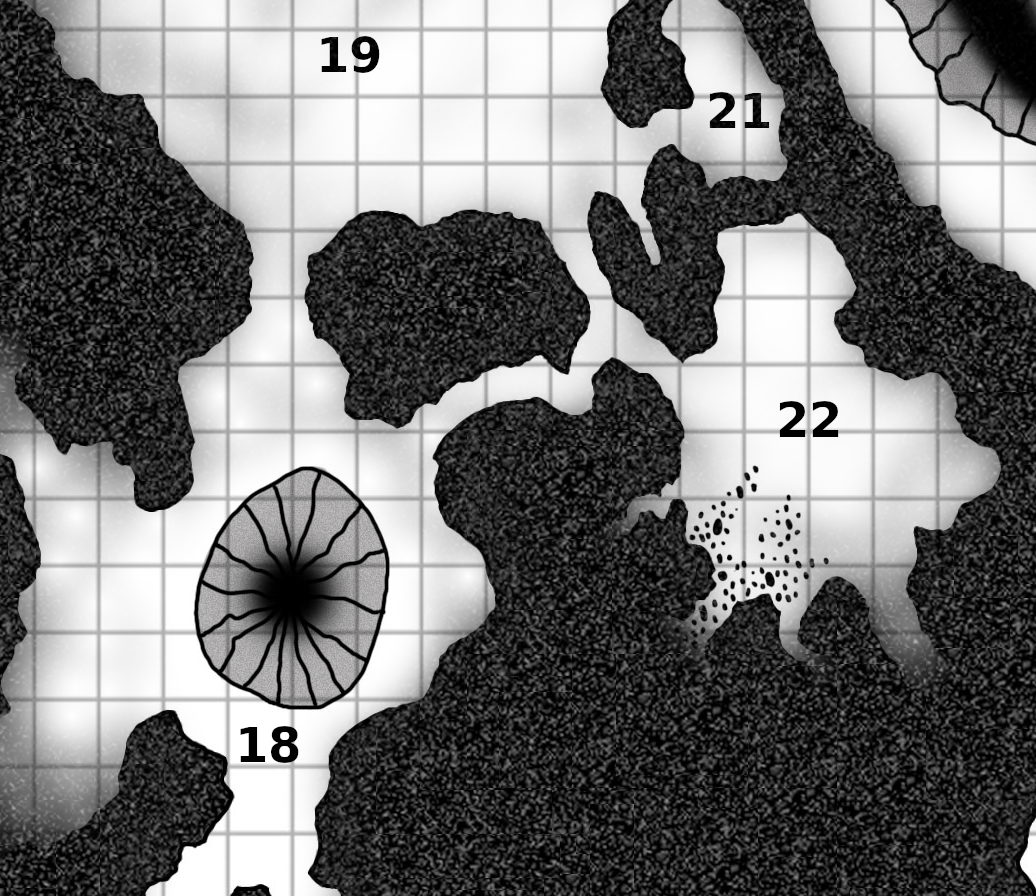 I think we should head for the SE exit (circling around the room clockwise to avoid the cracks in the SW section).
Maloof
Dame Simonetta

kipper wrote: I think we should head for the SE exit (circling around the room clockwise to avoid the cracks in the SW section).

Sounds good! Here is our marching order from last adventure: