Dougal examines the log corpse, trying to figure out why his sword strike was ineffective against the creature. He suspects it might have had some resistance to slashing weapons, but wants to confirm it for future reference.

After that is done, he will pull out a large sack and begin collecting the silver ore nuggets.
Dougal Blackfoot (MV 9", AC 6, HD 1, HP 5/5, FC 1 Man) leather, short sword+main gauche

Dame Simonetta admires the armour, wondering idly if she could salvage it to create a set of unique armour for herself, as she pockets the two potions from the belt pouch. However, her attention is quickly drawn to the medallion. She reaches forth to study it more closely.

MYTHOS check please!
Secondly, I would like to choose now to take "Dwarf" for one of Dame Simonetta's languages, if I am allowed.
Maloof
Dame Simonetta

Willie gets up gingerly, wincing, "ow"ing, and trying to catch his breath. He checks himself tentatively and is pretty sure nothing is broken.

"Wow, Kiplyn! I just caught that last moment out of the corner of my eye! That was great -- double-strike, tcha, tcha! Everybody, thanks, I was sure I was a goner! But thanks to you all, no need to avenge me."

He joins the others in the examination of the corpse and the runes. He has a notion that a mysterious medallion might be able to help Ursa out -- there's always a chance! So he peers over Dame S's shoulder, staring at the runes and letting his mind go blank...

mushgnome wrote: OOC: Apologies to acodispo! My character spreadsheet was slightly out of sync with my notes. I think Willie should actually have 5/10 hit points (not 4/9) because he got +1 hit point when he leveled up to a 2nd level thief after the last Adventure.

Dougal examines the log-corpse and thinks his attack failed simply because, all of the creature's vital organs are in the trunk section.
Monster Manual 2 entry for Kampfult: "Only the central section of the creature can be harmed," but they don't give any logical explanation for this, sorry.

Dame Simonetta thinks the armour would be comically oversized on her; she'd look like a little girl playing dress-up. The raw bronze could be re-purposed into a new suit, but would that really be an upgrade in protection from steel? But I like where she's going with this: For someone concerned with appearances, a suit of ceremonial bronze armour would be quite impressive-looking for social occasions, and the antiquity of the source metal would give it a fine pedigree! Does she take the armour to bring back to the surface as a collectable/decorative item? (weight 50lbs, as Mail)

Dame Simonetta and Willie spend a turn meditating on the mysteries of the Owl Medallion and gain the following knowledge:
Willie thinks back to the ancient tall tales of mythical Dwarves and Elves. Is it not said, that Dwarven women grew beards, just like their men? (he remembers)

Does anyone know Greek?
Ah yes. My old "you don't have to pick your bonus languages at the start" house rule. I've been running this house rule for decades. Is it as fun for you as it is for me?

I am going to rule No on the languages of Elves and Dwarves, as starting/bonus languages. In this campaign setting, Dwarves and Elves are basically mythical creatures, and the PC's wouldn't have had any opportunity to learn their languages.

Dame Simonetta is both the most intelligent and most cultured of the party, so it would be totally in-character for her to be well-versed in the classics.

Turning our attention to the Mythos checks: Nobody is opposing the PCs, and this isn't particularly forbidden or mind-shattering lore, so I'll make it a simple 1d6 investigative check. Can't fail, but the d6 determines how much you learn, and a roll of 6 forces a sanity check.

Dame Simonetta 1d6 = 4, she learns a lot and doesn't have to make a sanity check.
Willie 1d6 = 5, best possible roll, he learns all non sanity-threatening lore.

OOC: Looks like Dame Simonetta has unilaterally appointed herself Keeper of the Potions. Does anyone challenge this?

mushgnome wrote: ↑
Tue Jun 15, 2021 3:29 pm
OOC: Looks like Dame Simonetta has unilaterally appointed herself Keeper of the Potions. Does anyone challenge this?

mushgnome wrote: ↑
Tue Jun 15, 2021 2:43 pm
Dougal examines the log-corpse and thinks his attack failed simply because, all of the creature's vital organs are in the trunk section.
Monster Manual 2 entry for Kampfult: "Only the central section of the creature can be harmed," but they don't give any logical explanation for this, sorry.

That's a bunch of crap, MM2!!! At the very least, damage to extremities could sever limbs.

Nothing against you, Mush. You're just following the book. But it seems like in MM2, there were a number of sneaky things like this meant to hamper the PCs. As long as there's a logical reason, then that's fine. But this is sneaky sh!#. (Not really mad because Willie made it...)
Dougal Blackfoot (MV 9", AC 6, HD 1, HP 5/5, FC 1 Man) leather, short sword+main gauche

Dame Simonetta would love to take the armour with her! Can she carry it all on her own, or would she need to enlist assistance from her friends? 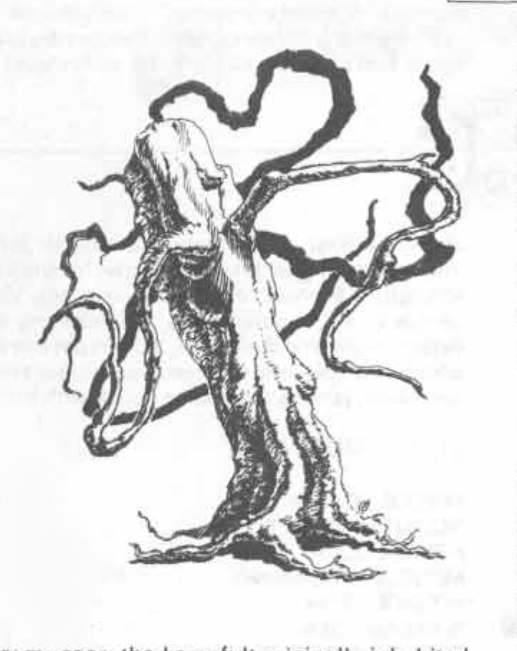 @ehiker133 I totally hear you, which is why I at least gave Willie a saving throw vs. paralysis.

Worst part about the MM2? The xp system! How many xp is a Kampfult worth? 36+2/hp. Spoiler alert, the one you just beat had 8hp. So split 5 ways, that means you only get 10xp each for that encounter (if we were using AD&D experience system).

Also, I wish I didn't have to type these words, but now that I've seen it, I just can't un-see it. Am I crazy or has the artist depicted the kampfult with a pair of human-shaped breasts?!? If so, then I think we have a new champion in the D&D "butter face" competition (dethroning the reining champion, Blibdoolpoolp).
Post a reply
176 posts